The Church of the Dancing Calf 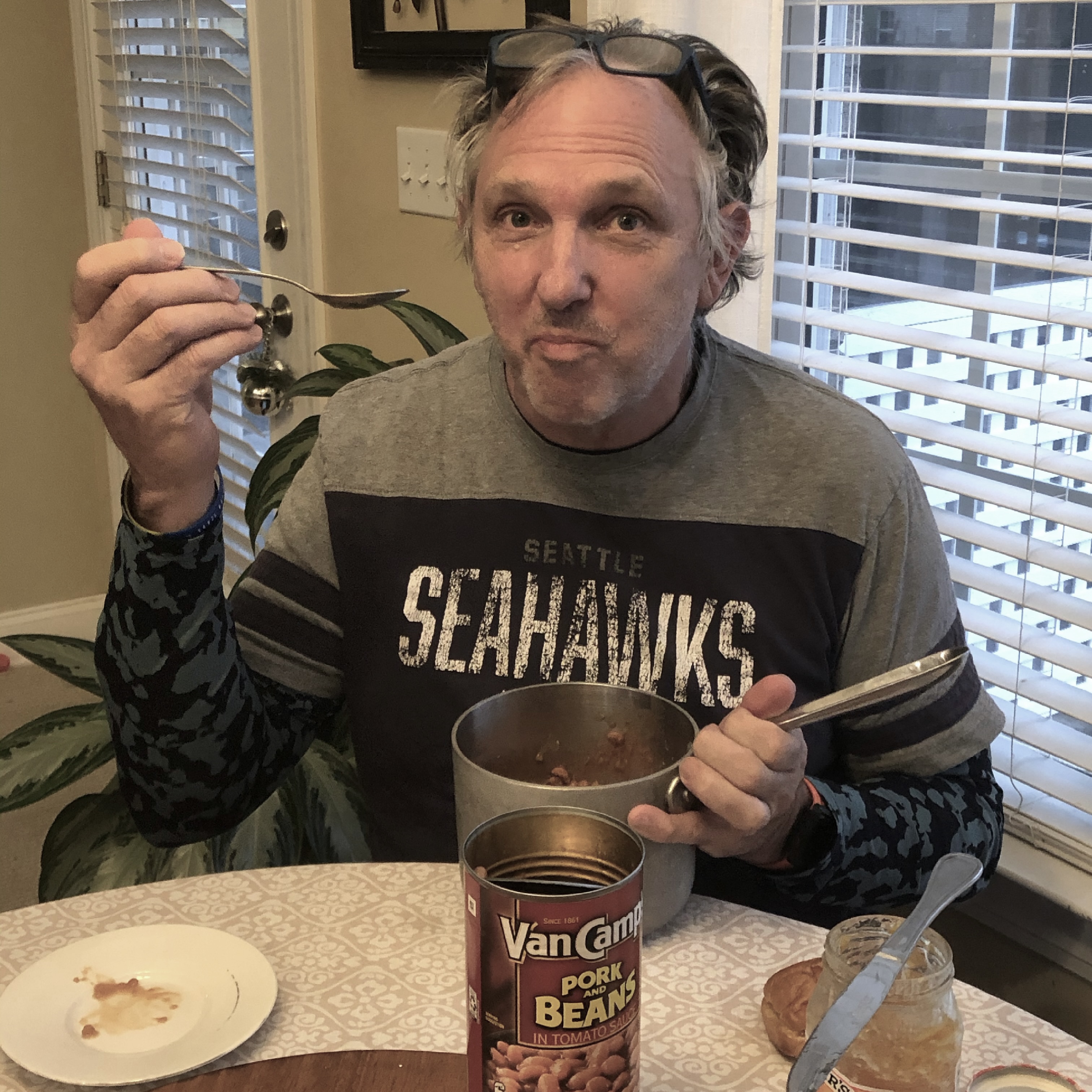 The writer, eating dad's favorite meal in the same way his dad would have: pork and beans straight from the pot.

I've written a lot over the last two decades. Mostly for blogs, but I've published several pieces, too, and written a couple of books. This was at home, before, after, and in-between work. At work, I wrote directions for collecting reactor coolant, and then, once done, I wrote long and arcane reports to the NRC explaining why we can do what we want to do. Happily, I've never been to jail for any of this.

At one point, with my sideline writing, I juggled four sites, each one focused on one interest. I bit like a squirming salmon into the blogging advice to hone in like a laser onto one microscopic topic. In short order, I was doing more juggling than writing, so I did what I do best and ignored sane advice. Now, I work to put everything I've ever written under one heading: The Church of the Dancing Calf. It gets a little messy, but so does your favorite used book store.

I write mostly for me, and mostly because I like it. I’m not trying to make a million billion dollars, and I catch myself slapping myself in congratulations for writing what I think to be a jewel of a sentence or paragraph. I suppose that makes me a literary writer.

The first story I remember writing was in 1965 when I was in the second grade. Since then, I've never stopped writing. Some of it was good, a rare two or three sentences were sublime, and almost all of it was schoolboy drivel. I'm more practiced now, but most of my writing still falls into those same bins. I write lots of new stuff, too, about Christianity and science and memoir and culture and how all of it intersects. I'm not always right and invite you to tell me your views. Iron sharpens iron, as they say.

I know that shoving all this stuff into one overstuffed suitcase makes it hard to find. I do a top-down sort with the menu, and for anything more, you can use the search bar.

At this point, I'm not doing any traditional publishing or selling memberships or anything like that which is popular now for writers and crafters figuring out how to earn a dime by doing what they love. I'm more of a 2,000-year throwback and leave it all to G.

So, for my part, it's all free. Nothing is for sale here, and there are no memberships or tiers, except for my books on Amazon, and that's pure laziness. It's simply the easiest way to meet the most people worldwide. I set Amazon prices low in hopes that anyone can afford them, but if you can't, let me know.

If you like, you'll see a donation space in the right-hand sidebar. You and G can figure out what to do with that.

Sunday Lesson – A prayer before reading

Falling down on the slip-N-slide

In What Makes Olga Run? author Bruce Grierson jumps headfirst into the life of Olga to understand what makes her special. What he finds is that Olga wasn't very extraordinary.

The disciples scolded the man. “Shut up, beggar,” they shouted. “Leave the Master alone.” An assenting murmur ran through the crowd, but it did no good. The blind beggar shouted with more urgency: "Son of David. Hear me. Have pity!”

In What Makes Olga Run? author Bruce Grierson jumps headfirst into the life of Olga to understand what makes her special. What he finds is that Olga wasn't very extraordinary.

In What Makes Olga Run? author Bruce Grierson jumps headfirst into the life of Olga to understand what makes her special. What he finds is that Olga wasn’t very extraordinary.

We tested at a fertility lab and discovered we were both marginally normal, but rested on the lowest bar of that range.

But here’s a gentle beef. Gentle because it’s a human thing, and I’m a human, too: we seek out stories that argue for our belief.

Another crumb falls from the table. Hurry and catch it before the dog gets it.

“When I look at these results?” he said, “this isn’t medicine. This is magic. I don’t know what they did, but you should talk to them. Thank them. These people are magicians.”

A few words about the site:

The Church of the Dancing Calf.

The Hebrew scriptures end in the Christian Bible with the short book of Malachi. We aren't sure of the writer - Malachi means 'messenger' - and consists of six short passages written around the mid-fifth cnetury BC, a hundred years after the Babylonian exile. In the sixth passage, the writer writes about a coming day, for those who love G, when the Son of Justice will rise , and and you will leal like a calf coming out of the stall. That image never eaes me. I've seen a few horseand calves leaping from the stall, and I have a dog who runs circles round the yard for the pure please of runing. That is how I imagine Christianity should be. RUnning around the yard, leaping and dancing comeing out of the stall, and singing just at the very thought the Gadopts us as sonds and daughtter.

I've been writing for a couple dozen years now, with one two or four blogs. It's tiresome. I decided to cashthem all in and combine everything into one blog. There's a lof of posts and a lot of words and a lot of ideas. Some you will like and som you won't.

So, read and enjoy and keep comeing back. If you like, you can sign uf for an emailed notice when I post soemthing new. Be forewatrmed: it's a lot.

It's all free. There's no membership or subscription payment to get special stuff. I've published a good bit over the last thirty years but I don't now, mostly because I''m just tired of the doing. I dont have the time to write that I'dlike to have so I prioritize. Writing come frst and the business of writing comes to a distant second. And, I'm sorry, but I no longer do book reviews. Of course I will change my mind if a gatea keeper wants to do the work for me.

Just like any local library, this is where I store everything. It's my default post and everything goes in there, =from essays to blog posts, to photographs of my kids to an occaissional email. All published in descending chronological order.

The Christian header lists - wouldn't you know it? - all things Christian. I write a lot of semi-theology, a lot about my experience and observations as a Christain, and I write a Sunday Lesson, too.

I was a wirking scientist for years and it's still a fascincation to me, especially evolution and moleculat biolofy. These are under the general hearding f  scince.

A walk through the popolars is a fun place for me. The greatest wiriter of all time - the great Leonoid Tolstoy - live on a large farm with a central walk lined with popars. I often think abaout the walk and what general talks and runinataions we oudl have under those trees.

The best way to find specific things is th search for them. Of course, I would love you to scoll through a hundred posts for you to find what our'e looking for. But if you are a modern and want speed and efficinty, thry seaching.

Selah, thanks, and good reading!

Or enter a custom amount